Tomorrow, I will take part in The Women’s March on Washington in Toronto. I’ve had a hard time since this election, and a hard time putting into words the way it has made me feel. I’m writing this on the day of President Trump’s Inauguration (which in some ways has felt like a funeral). But I look forward to marching tomorrow, because I’m ready for a rebirth.

I’d love to be in D.C. with some of my friends–and strangers–whose values I share, but family obligations keep me at home. In a way though, I love the opportunity to be a part of this movement where I live, to represent my dual existence as an expat living in Canada. I also believe the messages of this movement are messages for Canada as well as America. So, here is an explanation of what those messages are to me.

Climate change is real, and we must work immediately to stop it.

My children should not have to clean up the environmental catastrophes brought about by the actions, or inactions, of their ancestors.

I am a feminist (and that’s not a dirty word).

No one can grab me or anyone without my/his or her consent, and I will not excuse or normalize misogynistic language or behaviour.

Women are amazing, and society is strongest when women are equally involved in leading it.

I support the LGBTQ community.

Those who identify differently, look different, or love differently than I do nevertheless deserve to identify, look, and love as they do, because we are all people, and love is love.

I recognize that the colour of my skin represents a standing invitation to assume the throne of supremacy, and I must reject that invitation again and again and instead stand with people of colour who rightfully demand the same opportunities, rights, and respect as anyone else.

In a wealthy nation, access to healthcare, food, education should be considered human rights.

I believe in protecting life; I feel the best way to do that is to educate people about their biology and give them agency over their bodies through access to equitable healthcare.

I believe in freedom of religion, and I believe the majority of people are good and share the same moral, human values.

Muslims are not terrorists; extremism exists in all belief systems, and it exploits people who are lost.

The plight of those facing extreme poverty, oppression, violence, war, or death, is not a burden to turn our backs on, but an opportunity to practice humanity and compassion.

Opinions are opinions, facts are facts, and we mustn’t confuse the two.

I support a strong, independent press who are our eyes and ears in the halls of our governments, our markets, and among us, and believe that the majority of those within the media are responsible and balanced.

I believe in government–that it can be a force for good in people’s lives, that when we are engaged and demand a government that is accountable to us, it is the embodiment of our collective strength and mutual support.

Pride in one’s country is important, but openness to the merits of other cultures and people both enriches and strengthens us.

We cannot move forward by going backward; we are industrious and adaptable and capable of growing with a world that changes rather than clinging to an imperfect past.

I still believe in the best of what America represents.

Are you marching? Why? If not, feel free to share why you would march! 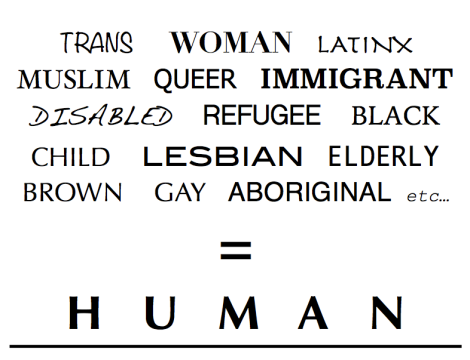