Before becoming a mom, I rarely got sick, even during the winter. Seldom did I have the flu, get nasty colds, or deal with weeks of sniffles, coughs, and fatigue. But now I am the proud minder of a germ magnet. It happened last year right around the beginning of January. A flu bug that swept through the house, yielding loads of laundry measuring in the dozens. Then, the colds, upper respiratory infections, coughs that would come and go in a whiplash of “do I call the doctor or not?” that lasted until sometime in late March. This year, it started at the end of January with a stomach bug, and now we’re at the point where “feeling good” just means I’m not puking or hacking up a lung. 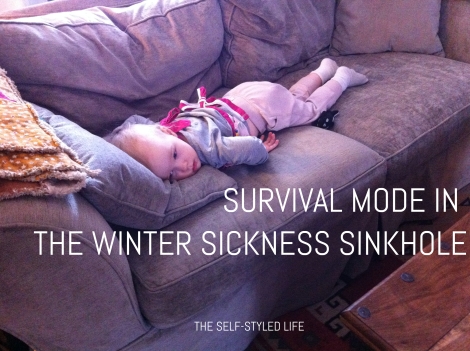 Short of a self-imposed quarantine during the sick months, there’s little way to avoid it. It’s too cold for the park every day, so we frequently end up at the community centre’s drop-in play. Though I know the children’s program coordinator there cleans the toys regularly, these little germ mongers are sneezing, coughing, licking, and sucking on all of the toys and surfaces. They steal each other’s food and sippy cups. They crawl through the winter muck on the floors and then put their fingers in their mouths before you can scream, “Let me get a WIPE!”

In the crazy rush of blowing noses, preparing food, and dealing with the toddler whose new favourite game is to run away as I’m trying to put her winter gear on, I admittedly wash my hands less than I know I need to, especially since my bathroom breaks happen even less frequently than my bladder needs. Not only is the kid constantly sick. I am, too.

One of the big challenges of being a stay-at-home-mom is that I don’t get sick days. Even when I feel like shit, I still have to “go” to work. And it must be awful for working parents, too, who are tired from going to work, but then still have parent the kids whose demands never let up. It’s just all bad.

And even if you don’t have children, being sick is still crappy. Many people experience this cascade of sickness during the winter–one thing gets you, you’re weak, and so the next little bug that enters your sphere decimates your well-being like a Mongol horde, with little fight from your enfeebled defences.

Pre-kid, I would be proactive when I thought I was getting sick. I’d go to bed early, eat well, and take extra vitamins to try to ward it off. Now I tend to push on when I’m sick (at least with something I know is minor), as if I can will the sickness away by refusing to acknowledge its existence.

Along with that, I also find that my self-expectations rarely let up. I still want to run things as I do when I’m well–keeping the house clean, making nice meals every night, being an active, engaged mother to my daughter.

But after feeling less than even 75% for the last month, I’m beginning to cut myself some slack. Today was a balmy -4C, and despite the gusting winds that windburned a splotchy map onto my sensitive complexion, I sniffed the scent of spring-to-come on the air. OK, I though, we just need to make it through these next few weeks.

So what if we’ve watched a bit too much TV this winter and gotten into some bad cabin-fever induced snacking habits? We’ll sweep out the pestilence and laziness of winter when we open the windows to the spring breezes. We’ll be outside on walks and in the parks in no time, leaving no time for TV. We’ll be on the move, packing our picnics and snacks and running and climbing and playing in just a couple of months. A bit longer in survival mode will not ruin us! It’s just not fair to expect the same level of output when you’re sick and tired.

But oh, Spring! We are ready for you!

How do you take it easy when you’re sick, or don’t you?

5 responses to “Survival Mode in the Winter Sickness Sinkhole”