I also saved my dad’s butt as this was a responsibility he’d been putting off for weeks. My mom had been quite peeved, which reminded me of the spillover effect of procrastination: how much it can piss off those around you.

Despite feeling that I am steadily conquering my procrastination proclivity (which clearly comes from my dad), I still have to make an effort to overcome the seemingly innate slide into inertia.

To that end, I recently came across Benjamin Franklin’s daily schedule, as recorded in his “Autobiography.”

If not for the rest of his history, I might conclude that Mr. Franklin was a bit of a bore, or had something rigid up his backside. Instead, I take it that he embodied a potent combination of inventiveness and ambition.

He does continue to say that he struggled with the scheme, particularly the “order” part of it (he was apparently quite messy).

But this is lovely:

In truth, I found myself incorrigible with respect to Order; and now I am grown old, and my memory bad, I feel very sensibly the want of it. But, on the whole, tho’ I never arrived at the perfection I had been so ambitious of obtaining, but fell far short of it, yet I was, by the endeavour, a better and a happier man than I otherwise should have been if I had not attempted it.

Just the act of trying to improve was itself satisfying, even if total perfection still eluded him. When I wrote about procrastination, I noted that the most effective thing so far has been a mindset adjustment: stop beating myself up for the tendency, and stop allowing a desire for perfection to keep me from ever starting.

[Sidebar: the link I–and many–perceive between perfectionism and procrastination is a disputed one. Maybe the cause is something closer to the impulsiveness that causes us to seek the easy route, but either way, the lesson is to just do it in spite of the mental hang-ups.] Hence a highly successful marketing campaign from Nike:

I figured a picture of Rafa in Nike would be much more... inspiring... than some boring Nike spot.

Now, I find the rigidity of Franklin’s scheme a bit off-putting. Doesn’t it seem sad to schedule in things like “diversion” and “conversation”? (Incidentally, I’ve noticed a trend in people scheduling in a certain other activity, which also feels sad to me, though these people generally swear by it.)

But I do think there’s something to the act of writing out a schedule, if only to help  prioritize the day’s tasks. I’ve had planners before, but just for recording things like appointments–never for planning out the whole day. I think the daily act of planning even small tasks can serve as a reminder that our time is valuable–or can be if we use it wisely. 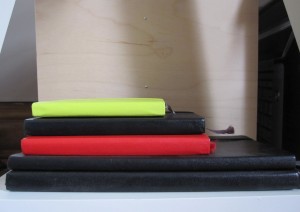 Years of half-baked attempts at getting organized. (note how they got smaller over time--this year's is on top)

I especially love the self-examination aspect of Franklin’s schedule (in the left-hand column). If we start the day asking what good we hope to accomplish and give that higher goal its own space, we are setting the bar without getting bogged down in the minutiae. Furthermore, the end of day reflection adds an element of accountability, reinforcing that motivation.

So, I think I will give this a try and report back on the progress!

Have you ever tried something similar? Do you make lists? (do they work??)

And do you like how I can slip in a picture of Rafael Nadal no matter how unrelated to my post? I mean, better him than Ben Franklin, right? 😉