Habits and routines are a bit like patterns: that pleasant sense of repetition, the comfort of knowing what’s coming up, the order they can bring to life. Even the bad ones–ultimately destructive or unhealthy–can carry these “good” feelings, which provide the reinforcement that makes them difficult to break. 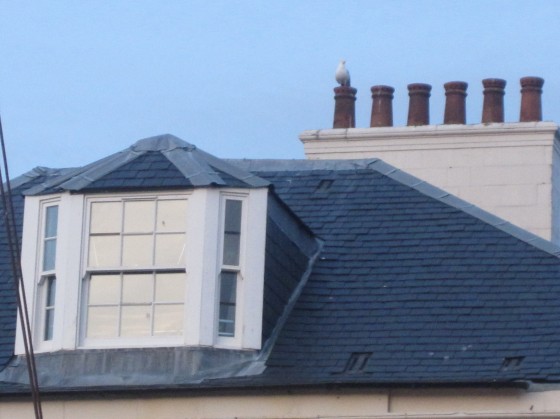 The pleasant repetition of chimney pots on the roofs in Scotland

The distinction as I see it is that a habit is involuntary–a behaviour that comes naturally to you, probably after a great deal of repetition. I was a long-time early riser and generally still consider myself to be a morning person. I may have adopted this from my dad, a TRUE early riser. It could also have been made over the course of the school years waking up to catch an early bus. But while plenty of my peers would happily sleep until noon on weekends and through the summer, I’d be up at 6:30/7am on Saturdays and summer days alike. Intended or not, I’d be up early.

Routines share that same sense of repetition but are more deliberate than habits. You make a conscious effort to do certain things that follow a specific schedule.

Habits and Routines Love Each Other

These habits and routines reinforce one another. Bits of a routine can become habit: I love the routine of making coffee in the morning, which led to me become a habitual coffee drinker. Now, even if I don’t have time for my elaborate fresh bean-French Press routine, I’ll still get my fix in. And the reverse: an early rising habit will influence the morning routine. I wake up well-before I NEED to, but I like walking the dog, doing yoga, making a solid breakfast and enjoying it at a leisurely pace before getting ready for work.

Part of why I love mornings: I'm a breakfast fanatic.

It Goes for the Bad Ones, Too

The bad habits and routines are self-reinforcing because of the immediate gratification of giving in. But the price of this short-term sense of pleasure is the neglect of long-term health, productivity and lasting happiness. It feels so good to treat yourself to a sweet/chocolatey/sugary/fatty dessert after a meal, but when it becomes a habit to have something indulgent after every meal, that will become a problem for waistline and wallet alike.

I’ve been thinking about these issues lately because circumstances and inattentiveness have been leading me to some bad habits and routines. My early rising tendency has been sliding, despite DECADES of waking up early! That I often go to bed too late, that my husband is still peacefully sleeping when I should get up, that my bedroom now faces west (and a building) thereby reducing the morning light, have all led me to slumber longer, hit snooze or just give up and set the alarm for a later time. As a result, I’ve neglected healthy routines such as yoga in the morning.

There are reasonable causes for some of these slips (which I’ll get to later), but overall I have allowed the lazy trap to swallow me whole. The end result is that I feel less energetic and less productive, which leaves me feeling crappy overall. I don’t like being lazy. I don’t like sleeping in. My flexibility (and tummy) is sagging!

So I know that NOW is the time to put an end to bad habits/routines before I deepen those grooves. And while that determination is important, knowing just how to do that is another post entirely (which I promise to deliver later this week :).

Do you agree with the distinction and links as I outlined them or do you see habits and routines differently?

9 responses to “Habits and Routines: The good, the bad, the non-existent…”