I did warn that the posting schedule might get a bit sketchy following the birth of Baby #2, and here I am, writing the first post in quite some time. But a funny thing happened here. I had a post all ready to go, just a few weeks after Machrie was born. Yet for some reason, I never got around to posting it…

These little bugs keep me busy (and tired)!

It was about my strategy for being productive even while taking care of two small children (one a newborn). It involved me making a task list in my head while sitting and feeding the baby, constantly trying to stay one step ahead of myself so that as soon as I had five or ten or thirty minutes to get something done, I’d have a mental checklist all queued up for myself and I’d spring into action in a craze of multi-multi-multitasking. I even threw out terms like “whirling dervish” to describe these planned moments of frenzied productivity. The post title was “Stolen Time.” That right there should have alerted me to the folly of this concept.

The post was pretty much done. Multiple drafts, proofread, with links and photos. But I didn’t post it.

I think deep down, I knew it was shitty advice.

Because then I had a bit of a burn out. People would ask how things were going with the second kid, and I’d offer a cheery “fine!” But really? It’s been tough. My daughter loves her baby brother, but she clearly does not love me having to take care of him. She was letting me know that through her behavior and attitude, not towards the baby, but towards me. And my response had been… less than graceful. More yelling than I’d like. More relying on the TV than I’d like. More angry shoving of muffins into my mouth than I’d like. I began to feel a rift forming between my daughter and me, and this feeling started to break my heart.

Just at the time that I really felt myself getting lost in this despair, a friend recommended a book about mindful parenting, Parenting in the Present Moment by Carla Naumburg. This friend and I have similar attitudes and tastes about a number of things, including parenting, so I immediately bought and read this book. It was indeed the perfect reminder at the perfect time to just slow down. 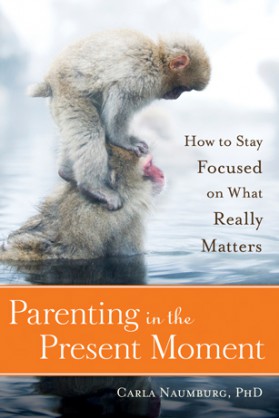 Mindfulness is a Big Thing these days. It’s the self-help buzzword behind such trends as adult coloring books and knitting and meditation. But despite my general skepticism-verging-on-hostility toward self-help trends, this is one I can buy into. It pops up in many established religions and philosophies and has a proven impact on health, happiness, and emotional well-being.

Mindfulness applied to parenting is about really paying attention to your children and your self in the moment so that you can form an appropriate, effective response to whatever is happening, rather than reacting in an overly emotional way. [I’m sure I’ll say more on this topic later, but for now I’ll just highly recommend this book–this shift for me has been a huge improvement.]

I saw that my mental list-making, springing-into-action strategy was completely obliterating my ability to just be here now. I was trying to work around my kids to get “stuff” done, forgetting that the kids are my most important work right now. I noted with relief that my daughter loves her brother after all, but didn’t take time to truly notice how the upheaval of his arrival was manifesting itself in her behaviour. And I was letting my anxiety over her behaviour impact my confidence in my parenting abilities. I’d lost my breeziness as a mom and was instead running on full frenzy.

Giving myself permission to slow down was a huge moment of relief. And then I realized with amusement the reason for letting that post collect dust in my draft folder–that crap advice didn’t deserve to see the light of publishing.

Funny how we tend to know these things instinctually…

2 responses to “A Return to Slowing Down”

© Jean Brown and theselfstyledlife.wordpress.com, 2020. Unauthorized use and/or duplication of this material without express and written permission from this blog’s author and/or owner is strictly prohibited. Excerpts and links may be used, provided that full and clear credit is given to Jean Brown and theselfstyledlife.wordpress.com with appropriate and specific direction to the original content. Unless otherwise specified, all images are property of Jean Brown. You may reuse images for non-commercial purposes by providing credit and a link back to the source.
%d bloggers like this: